Early this spring I was asked if I would make a batch of cupcakes for a friend to bring to work before he went off on his paternity leave. His only stated wish was that the cupcakes would have a Star Wars theme, and so I ended up with a dark vs. light side concept: these lovely dark chocolate cupcakes with marshmallow frosting and marshmallow stormtroopers vs. blondie cupcakes with raspberries, salted liquorice frosting and miniature stars and lightsabers made from homemade fondant. 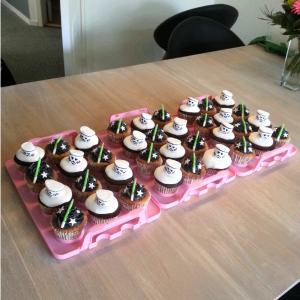 The complete batch of Star Wars cupcakes ready for pick-up!

The recipe for the marshmallow frosting I arrived at through several experiments. I wanted to try a recipe by Annettes kager, a Danish cake blogger whose recipes I’ve found to be reliable, but couldn’t get my hands on glucose in crystalised form when I needed it – the local stores only offered a syrup version. So I tried a few recipes using glucose syrup, but found that the frosting would either collapse rather quickly or become so viscious that you could hardly bite or cut into it without making a mess of the cupcake.

And so I went with a third option and decided to use melted marshmallows for my marshmallow frosting. Ingenious, right?

Well, actually I’m not the first person to get this idea, but again I didn’t have much success with the recipes I tried. But this one I think works quite well – it has a lovely vanilla flavour and is chewy like a proper marshmallow should be, yet you can easily bite into it without spoiling the rest of cupcake. 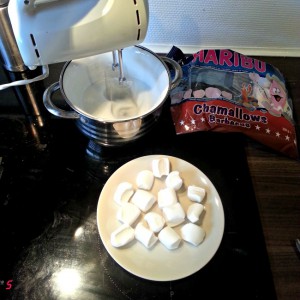 I have to admit that I don’t know whether this marshmallow frosting will hold up if you want to use a more decorative type of nozzle than a simple round one; but for the purposes of these chocolate cupcakes, where the frosting functions as the base for an army of marshmallow stormtroopers, it was absolutely perfect. My husband actually claimed that this was the best frosting he’d tried yet, so I guess I’ll have plenty of chances to test different piping methods later on

For the decoration I drew stormtrooper heads onto marshmallows with an edible marker – who says not to play with your food?

NOTE: If you decorate your cupcakes with marshmallow frosting in a single thin layer, like I did for my stormtroopers, I will recommend that you fill your cupcakes with a little extra frosting. Cut a small cone out of the top of the cupcake, fill up with marshmallow frosting and stuff the cupcake cone back down before adding frosting on top if you don’t want delicious cake to go to waste