Classic Danish Raspberry Slice in the Shape of a Cupcake

– A raspberry slice is a classic Danish pastry which my dear father loves very much. (I think he is actually a member of a raspberry slice fan club!) So when he suddenly had to go to the hospital, I decided to create a raspberry slice cupcake to cheer him up. I found a couple of recipes online that were trying to do the same thing, but to me they where simply vanilla cupcakes with raspberry jam in the batter, or the frosting, or both. I wanted a cupcake that recreated a sense of the real thing – crisp shortcrust pastry layered with raspberry jam, white glaze on top – so I decided to experiment. And I am actually quite proud of the result

My raspberry slice cupcake is a vanilla cupcake on top of a pre-baked shortcrust pastry bottom spread with a layer of thick raspberry jam, a raspberry buttercream frosting and little crispy glazed shortcrust pastry hearts on top. The cupcake is best freshly baked when the pastry bottom is still a little crisp – but if necessary, you can make it a day in advance (I haven’t tried to freeze it). The bottom will be soft, but the most essential thing for this cupcake to work is that you decorate it right before serving it so that the pastry hearts on top remain crispy.

For the shortcrust pastry I used a recipe by the Danish confectioner Mette Blomsterberg, adding a little etxtra vanilla. The vanilla cupcake is based on a recipe from the blog Life, Love and Sugar – however, I replaced the  vanilla extract with whole vanilla bean pods. Extract is fine as a supplement when you just need it to help enhance or balance other flavours but when vanilla is the flavour, your cupcake deserves the real thing! I also made a few changes to the procedure as I don’t think it works to just dump the room temperature butter into the batter and beat it with the wet ingredients when you also need to be careful not to overmix. It simply leaves to many large lumps of butter in the batter. At least that is my experience.

The frosting is inspired by a recipe from Sally’s Baking Addiction, but using a homemade raspberry syrup and a little less sugar – I must admit that American buttercream frostings tend to be a little too sweet for my taste

Have fun and enjoy!

Inspired by Life, Love and Sugar: 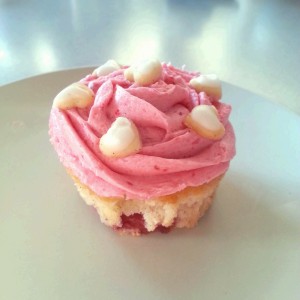 The raspberry slice cupcakes that were baked in the morning and eaten in the afternoon still had a little of the texture and crispness of the shortcrust pastry bottoms. Some of the raspberry jam had run out over the bottom and been caramelized while baking – yum!

I have scalled down the original shortcrust pastry recipe to 1/3, which should fit the amount of cupcakes you’ll get from the cupcake batter. Should you have some shortcrust pastry left – or should you “accidentally” have made a double portion (if you’ve never tried a Danish raspberry slice before, you really should!) – miniature raspberry slices serve as a delicious luxury cookie for your tea or coffee. Spread the bottom with a thick layer of raspberry jam and the top with a simple white glaze made from powdered sugar and a little water, and decorate with sprinkles of your choice. I recommend freeze-dried raspberries. Serve them on the same day as you make them, or they will get soft from the moisture in the jam and the glaze.